Tag Archive for: Princess Charlene of Monaco in South Africa

You are here: Home / Princess Charlene of Monaco in South Africa 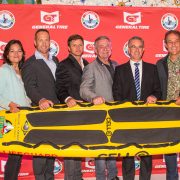 Umhlanga, Durban – It was a gathering of well-known local dignitaries and friends of Her Serene Highness, Princess Charlene of Monaco, who were present to witness the announcement of The Princess Charlene of Monaco Foundation in South Africa’s patronage of General Tire Lifesaving South Africa. Treble was there to pull out all the stops and deliver a royal-standard event.

Treble staged the announcement at the luxurious Beverly Hills Hotel in Umhlanga and was attended we invited such dignitaries as former South African Rugby star John Smit and current Springbok Tendai The Beast Mtwarira. Numerous South African Surf Legends were also there to make their presence felt, including Shawn Thompson and Jason Ribbink. The host for the night was South African comedian and the official LSA brand ambassador, Siv Ngesi, who kept the crowd in giggles throughout the evening.

As the exclusive commercial partner to Lifesaving South Africa, Treble worked with LSA to secure HSH Princess Charlene to come on board as the official patron to the impactful organisation. Having a common goal and vision of promoting water safety, HSH Princess Charlene accepted this special call, which is close to her heart.

Mr Gavin Varejes, President of PCMFSA, also announced the distribution of two-hundred rescue boards, valued in excess of R 2 million, from PCMFSA to LSA, in conjunction Cell C and Richmark Holdings. This will see that every LSA-affiliated lifesaving club in South Africa receives rescue boards to carry on their critical service to the community. DHL came on board again to manage the delivery of the rescue boards to all clubs in the country.

The Treble team facilitated our usual world-class standard of event management, securing the venue, coordinating décor and catering, and delivering the dazzling branding solution. We are extremely grateful to Her Serene Highness, Princess Charlene of Monaco, for taking on this role and we look forward to working with her Foundation.