You are here: Home / Leeds Rhinos 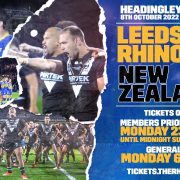 After nearly three years without top class international Rugby League in England due to the Covid-19 pandemic, fans can finally enjoy a feast of Rugby League action at Headingley Stadium this Autumn kicking off with a historic clash between Leeds Rhinos and New Zealand on Saturday 8th October, kick off 6pm.

With their unique knowledge of the oval ball game, the Treble Group UK were at the forefront of facilitating and securing this historic and exciting clash, which is a pre-cursor to the Rugby League World Cup to be staged in England this coming October.

The match continues a rich tradition of games between the two sides that dates back to the first ever touring side, the All Golds back in 1907. The match will be 115 years since Leeds and the All Golds met at Headingley for the first time on 26th October 1907. Three months later, Rugby League’s first ever Test was also hosted by Headingley with the Northern Union winning 14-6 on 25th January 1908.

Commenting on the clash, New Zealand Chief Executive Gary Hetherington said: “To have been granted a game against one of our great Test playing nations is a huge honour and a privilege for Leeds Rhinos. International Rugby League is the pinnacle of our sport, and it has been sorely missed over the last three years due to the global pandemic.

Our last meeting back in 2015 was a real ‘I was there’ moment with a number of former players making guest appearances including Ali Lauitiiti and Adrian Morley playing their final games as part of the occasion and I am sure we will have some surprises in store nearer the time. I would also like to thank the Treble Group UK for their role in facilitating the game,” added Hetherington.

Treble Group UK Managing Director, Kyle Nel, is excited about playing an integral role in delivering International Rugby League action to the Leeds fans – known for their deep love of the sport – and ensuring that the buildup to the Rugby League World Cup gets the recognition it deserves.

“As the excitement builds towards the Rugby League World Cup, a high-profile match between the Leeds Rhinos and the might of New Zealand at a historic rugby league venue like Headingly is a fitting celebration of the sport on the eve of its marque World Cup event.

“On behalf of the Treble Group UK team, we wish all our partners great renewed success as this big clash offers a unique moment in the sport for increased exposure and unlimited opportunities to grow the Rugby League World Cup, its traditions, and a new era of the game itself,” Nel said.