You are here: Home / Kaizer Chiefs 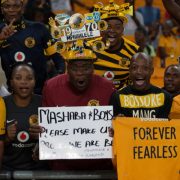 The Treble Group is proud to announce that we have been awarded a 3-year contract to oversee the entire food and beverage solution for the Kaizer Chiefs Premier Soccer League matches at Cape Town Stadium, as well as to manage the corporate hospitality suites and business lounge. Treble Group will also manage the stadium’s digital advertising sales.

Cape Town football fans, here’s your chance to see the defending league champions, along with their galaxy of stars such as Siphiwe Tshabalala, George Lebese and Lorenzo Gordinho play at their “home-away-from-home”, the Cape Town Stadium.

This is the first of 3 “home fixtures” to be played in the Mother City by the Amakhosi, at the world class 55,000 seater Cape Town Stadium on Saturday, 19 December 2015.

This showpiece will be followed by 2 further “home games” for Chiefs against Platinum Stars on 24 January 2016 and against SuperSport United on 20 February 2016.

“The people of the Western Cape in general and all the way to the Eastern Cape have been calling for their favourite team to play closer to their home. We are confident they will come in their droves to support the Phefeni Glamour Boys, starting on 19 December”, said excited Stadium Management SA Chief Executive, Jacques Grobbelaar. “This is the same loyal legion of fans that travel thousands of kilometers on a regular basis to watch their team play at FNB Stadium and will make this a Cape of Love and Peace experience to treasure for everyone’s festive season.”

Treble has exciting, fully catered hospitality opportunities on offer (with or without the added benefit of advertising on the 2nd tier digital ad scroll boards) for each of these eagerly anticipated clashes.

For more information on how to secure one of the limited number of sought after premium view suites, please contact Andre Walters of Treble Group on 021 685 333 / 074 214 7078 or e-mail [email protected]

The Treble team is looking forward to bringing you the Amakhosi spirit, as well as a world class experience, to the Cape Town Stadium.

See Kaizer Chiefs Rate Card below (Please be patient as the images may take a while to download):