You are here: Home / BokRadio 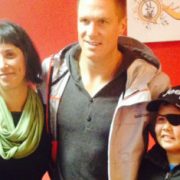 DHL Stormers and Springbok skipper Jean de Villiers was a surprise visitor at the Bok Radio Studios on Tuesday, 10 June, much to the delight of 12-year-old Reyneke from Robertson.

Reyneke was recently diagnosed with a brain tumour and his dream came true yesterday when he met his rugby hero who had some words of advice for the brave young man who has not only vowed to beat his illness but to one day play rugby again!

Reyneke’s mom, Karin and her friend, Monique, called upon the help of a friend who in turn, called Bok Radio, WP Rugby and Treble Group, who put the entire surprise together.

“The emotions in this house are just unexplainable. Since he was diagnosed with the brain tumour in the first week of May right up until today, I have missed my son’s precious smile. And now he cannot stop smiling,” said Karin Crous, Reyneke’s mum.

Monique, Karin’s friend said that it has been a tough four weeks for the family. Reyneke has been down in the dumps about his body failing him. However, meeting his hero, on crutches, made him believe that not only could he fight to get better but he also believes he can play rugby again!